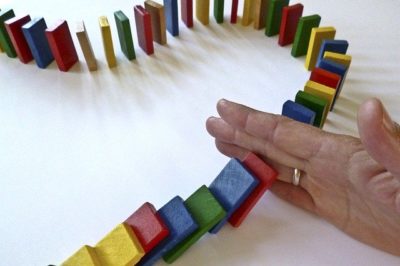 If you have already seen through the self-illusion, you probably noticed that this can’t be full awakening.

You still get easily lost in thoughts. Once in while anger floods you though you know that there is nobody who could be angry. And your favored snack is still all too appealing though you’re clear that there is no entity that wants to eat it.

Yes, it’s just all happening. But where is the equanimity you’d prefer over all the ups and downs? This certainly doesn’t feel like the full awakening process has happened.

What’s in The Way Of The Full Awakening Process

It is the reactivity. As long as you react, you’re not yet beyond the point where the full awakening process can unfold on its own. You probably noticed already that the sense of self can be really strong when you desire something or reject what’s happening.

Reactions confirm the belief that there is indeed a world outside of yourself and separated from you, which is substantial and permanent, and you could control what is happening in that world.

To fully awaken, reality itself needs to be seen as it is, and reacting to what’s happening doesn’t allow that.

Nondualists Also Get Stuck in Reactivity

Over the last years, I have worked with several seekers from the nondual path. They often have already quite a good grasp of the world not being what it looks like, but wonder why they don’t awaken fully.

In each case, the assumptions of desire and aversion held them back. They were still pushing and pulling at experience, trying to make it better. And with that they confirmed the opposite of what they could already grasp: that they are not experiencing a substantial world outside of them.

Are you investigating into the higher fetters, the assumptions of a subject that is separate from all other objects, or the faculty of perception? Or do you try to see through last subtle sense of ‘I am’ or ‘I exist’ and you feel stuck?

Most likely, there is still a remainder of the reactivity that holds you back. Pause the work in the higher fetters and turn your attention to the little reactions that happen. Reactive thoughts, little emotional upsets….

Use them for the inquiry into desire and aversion until you feel spontaneous shifts in the next fetters.

The higher fetters basically fall by themselves when there is no longer any reactivity.

Whenever you read or hear about teachers who abused their followers in some way, you can safely assume that the problem is that the assumptions of desire and aversion haven’t dissolved yet. It is possible to have deep passing insights and base a teaching fully on that without fully awakening.

Opening Up The Full Awakening Process

Only after the reactivity has ceased, the assumptions about reality itself can unravel. When you wait a bit, they will do that on their own, no extra work needed.

When you feel stuck and you’re 100% sure there is no self – go back to looking into wanting and not wanting. It’s the stepping stone into freedom.

It is clearly noticeable when desire or ill will are seen through. Often, it needs several rounds of inquiry with different topics until the reactivity fully ceases.

This is how it feels to see that there is no desire:

“Had an opportunity for another deep look for desire this afternoon as the desire to have a snack appeared. I looked and all of a sudden the heavens opened and the light bulb went on as I realized that desire does not exist!”

Would you like to work with me and open up the path to full awakening? I have an open space, you can contact me here.