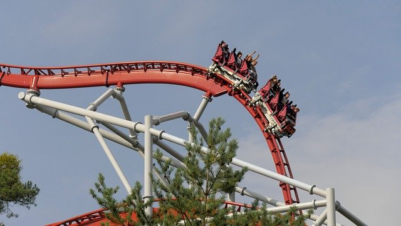 Do you think that awakening is a process of going from feeling average or worse to good, better, great, and then blissfully dissolving into One?

“I would have never thought that awakening is so messy,” a client wrote to me.

Though I use a linear model that helps you to let go of the beliefs in different self-aspects in a certain sequence, something else comes into play that is able to send you on quite a rollercoaster.

To deal with them, you need to have the mental and emotional stability and bandwidth to weather some storms.

With the weakening and, lastly, the falling away of any sense of self, the defense mechanisms weaken and fall away as well. They have kept uncomfortable feelings away from our conscious experience.

Old feelings or traumas that are not resolved will not simply disappear by themselves. You will have to address them, feel them, and may need support for that. The more you already worked through an old issue, the easier and quicker the inquiry will be.

Already after the first step, seeing through the belief that you are the controller, thinker, decider, and agent, old feelings start to surface.

The second step is one of the most emotional steps of this journey. You are looking into why you react and push something away or pull it closer. Often, your reactions will have their roots in your childhood.

It is advisable to address conflicts already in the second step because there are still defense mechanisms left and you won’t be hit too hard. You can do so in the inquiry and/or work with a therapist. At that stage, it is well possible to forget about the emotions for some hours and just do what you have to do.

Should old trauma surface, I would strongly suggest that you work with a trauma therapist. There are new methods around that help considerately in getting out of the survival mode and addressing the trauma.

When the illusions of desire and ill will have fallen away, reactivity ceases. The emotional turmoil has calmed down. A very peaceful period begins.

In the third step, you start to explore reality itself and enter the phase which Zen calls “mountains are no longer mountains.” The question is whether there is a subject that experiences objects from a center point of perspective, thus creating a relationship between you and everything else that seems to be separated from you through borders.

Though the new experience of what we think is reality can be a bit disorienting, old conflicted feelings don’t play a role.

The fourth step is one of the most fascinating ones. You are exploring whether you are truly experiencing a substantial and permanent world outside of yourself in time and space that is mirrored in perception. When it becomes clear that that is not the case, your old-world view vanishes. Everything looks insubstantial, doesn’t have any borders any longer, the notions of time and space are gone.

Though it can be a shock to see this – it was for me – old conflicts are not addressed and will most likely not surface. You will have to pay attention when driving or cycling, even as a pedestrian. Distances look different. I added some new dents to our car and even had to call AAA when I hit the curb at the gas pump. A curb might look like a flat surface, so look twice when it could be a curb as well.

After this step, you’re in limbo. There is nothing much left to look at, only a subtle sense of “I am” or “I exist.” Since everything else is gone, it is clearly noticeable but hard to catch. It’s like an itch you can’t scratch.

In the fifth step, the subtle sense of “I am” or “I exist” is explored. When it falls away, there is no identity left whatsoever, not even the most basic ones like man, woman, neutral, American, British, German. It might need getting used to.

And now that all self-aspects are gone, all defense mechanisms disappear as well. Old issues that have not been addressed yet will surface without the possibility to moderate them. They will be there and it is not possible to overlook them. For some, unknown trauma memories come up.

Take your time to work through whatever arises. Again, a therapist could be very helpful.

Often, the phase of arising emotions mixes with the sixth step, restlessness. The restlessness tries to restore what is lost, especially the sense of “I am.”  When you have trauma in your past, the topics can be influenced by that.

When I experienced restlessness, it wasn’t just looking for the “I am.” It was looking for the girl that needed to be protected. I didn’t recognize it and felt quite upset without knowing why. Kevin, who guided me, finally had the idea that it could be that. And when he said it, the storm calmed immediately.

Coming to grips with there is nothing safe to stand on or hold onto, nothing reliable, and no way to always be happy might take some time. When you’re finally okay with it, the restlessness calms down.

In the seventh and last step, the view becomes clear on what has always been the case and why we thought we didn’t know and started to create an alternate reality in our thoughts.

This is a very unemotional step, it’s more a “What did I think??”, and a falling away of a big burden. You will experience an imperturbable peace, even if more issues come up.

And they will. The client who wrote to me is already beyond the fetters. But a situation happened that let her dive deeply into unresolved old traumas of her childhood which she will now address with the help of a therapist.

Looking into trauma is easier beyond the fetters because you’re no longer so entangled with the content of your memories and feelings. It is more like, “Isn’t that interesting!” By now, you are well versed in being with your feelings and don’t feel threatened by them any longer.

I read somewhere in the research materials from @JefferyA.Martin that the release of old emotional baggage can take up to seven years.

In my upcoming book “Finding Awakening,” which I hope to publish at the end of November, I describe in detail how I worked through all the emotions and memories, sometimes taking a many months-long break from the inquiry. Especially if you’re in the midst of it – it will get easier. It’s not over for me, so I can’t promise it will be over, but I can say that it doesn’t bother me any longer. Feelings are simply feelings, welcome to stay and go as they do.