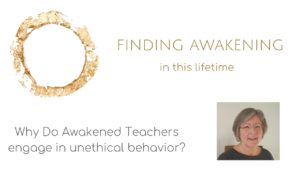 Why do awakened teachers engage in unethical behavior like having sex with their students, lashing out in anger or acting in cruel ways?

Is it that they are still processing personal material that needs to be tended to or are these behaviors simply part of being human?

What Does “Awakened” Mean?

Let me first define how I use the word ‘awakened.’

This definition for what awakening is can be found in the Pali Kanon, a compilation of the lectures the Buddha gave during his life.

“What, bhikkhus, is the Nibbāna-element with residue left?

Here a bhikkhu is an arahant, one whose taints are destroyed, the holy life fulfilled, who has done what had to be done, laid down the burden, attained the goal, destroyed the fetters of being, completely released through final knowledge.

However, his five sense faculties remain unimpaired, by which he still experiences what is agreeable and disagreeable and feels pleasure and pain. It is the extinction of attachment, hate, and delusion in him that is called the Nibbāna-element with residue left.”

The extinction of attachment, hate, and delusion is called Nibbana which is a synonym for awakening.

Nibbana with residue means that pleasure and pain are still experienced. Auwakening is not an ever-blissful state. This residue only disappears with the dying of the body.

Old Conflicts That Need To Be Tended To

For nearly everybody, old conflicts will arise on the path to awakening and beyond. All the old conditioning we brought with us will unravel. This process can take a long time.

In his research, Dr. Jeffery Martin found that the unraveling happens on average up to 7 years after awakening. Since ‘awakening’ is a term that many people use differently, this is not an exact time measure. But it makes clear that the flushing out of old conflicts can go on for a long time.

When no attachment or hate is left, this unraveling happens as an ‘internal’ process. Emotions are felt but there is no acting upon them since there is no reactivity or resistance to experience. It can be really intense.  In this video I talk about what happened to me recently as an old trauma was triggered.

When An Awakened Teacher Engages In Unethical Behavior

Should the arising of old emotional conflicts lead to acting out in any way, or unethical behavior happens because of desire or aversion, seen from the fetter perspective, awakening isn’t fully there yet.

The Buddhist concept of the Ten Fetters describes assumptions and interpretations, that are tightly woven into our experience and don’t allow us to experience the awakened state.

Unethical behavior is caused by desire or ill will, as the fetters 4 and 5 are traditionally called. These fetters are the assumptions that there are driving forces pushing us to get what we want and reject what we don’t want.

How Can Somebody Think They Are Awakened When They Are Not?

It is rather easily possible to think you’re awakened when in fact you’re not. It happened to me too.

First of all, nobody really knows what awakening feels like. In spiritual communities, the word “awakening” seems to point to a rather exclusive state. I certainly thought that life would always be easy, and I would always feel good.

After I had done a first round through all fetters, it felt like everything was gone. Life was easy. It felt good.

And then, about two months after going through the last fetter, I became ever so angry at somebody! When that happens, it’s very confusing. There had been no reactivity for half a year (after the fetters 4/5 had fallen away), and there I was, acting out my anger badly. In the first moment, I didn’t know what was going on.

It took me a day to realize that I actually wasn’t beyond the fetters but had been in my ‘leading edge’.

The leading edge is the more intellectual grasping of the truth without experience having followed fully. The trailing edge, where I was experientially, was still in the fetters 4 and 5.

It is very humbling when this happens and the tendency can be strong to rationalize what is going on with some kind of excuse.

But it was too obvious to overlook. So, I went back into the inquiry, looking into all my feelings. And while looking into my feelings, the last sense of self fell away (8th fetter). The trailing edge in 4/5 hadn’t allowed the later fetters to be fully released.

I was very relieved that the person I had been so angry with accepted my apologies and we could reconcile.

Honesty is The Most Important Asset

Honesty, especially honesty towards yourself, is the most important asset in this journey. It is simply not helpful and will fully stop you in your tracks if you don’t acknowledge that you’re still reacting.

Desire and Ill Will can hang on for a long time, and in my experience with seekers coming from the nondual path, there can already be a deep insight into fetters further down the road, while the assumptions of Desire and Ill Will are still alive and well.

For Teachers Who Engage in Unethical Behavior

If you are reading this by chance, I would invite you to simply face what happened. Yes, it doesn’t feel good, it is humbling, you might have to apologize and make up for it. Allow all the feelings. Honesty will be your biggest ally.

Reach out to the Association for Spiritual Integrity to get help. I’m a member of this association and can assure you, that you won’t be judged. On the contrary, it is highly acknowledged if a teacher looks for help in such a difficult situation. You can be connected   to experienced people who work with communities and teachers who are facing the fallout of unethical behavior and help you and your whole community to heal the wounds and find a new way of proceeding on the spiritual path.

For Students Who Are Affected By The Unethical Behavior

When you find out that your spiritual teacher engages or engaged in unethical behavior, it  can make you leave the spiritual path for good. It happened to me, I didn’t want to have anything to do with teachers. I was done with spiritual teachers for all lifetimes to come.

I encourage you to look into your expectations. Did you put your teacher on a pedestal and excused a lot you noticed, maybe hid it even before yourself?

Awakening is not something special. It doesn’t feel special. It is simply seeing experience for what it is.

Expecting the teacher to be special in any way fosters illusions and expectations, and the dis-illusionment will be hard.

I now see a teacher like I saw my viola teacher. He is a wonderful musician and taught me a lot. But I needed to do the practice every day, he wasn’t a magician who could make me be a great musician as well. And he was a very normal person who had worked hard to master the skills of playing the viola and that’s what I needed to do as well.

The same is true for awakening. On the path through the fetters, you’ll look for yourself and find out what’s true and what isn’t. There is no magic involved.

If you are very distraught by your teacher’s unethical behavior, consider working together with a therapist to resolve this issue so you can go ahead on your path to awakening.

And now, I would like to know which experiences you had with teachers? Did or do you feel abused on some level, or is your teacher engaging in unethical behavior?

Did you yourself think a fetter had fallen away and found out later that the fetter was still there?

Let me know in the comments.

If you don’t know the path through the fetters yet, I invite you to download my free introduction to the inquiry into the ten fetters here.